To get all migration process details contact our professional migration team 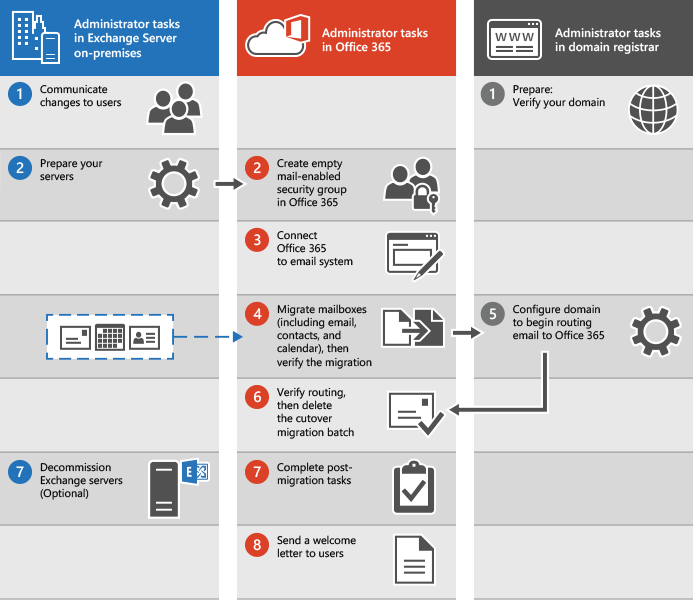 For migrations from an existing on-premises Exchange Server environment, an administrator can migrate all email, calendar, and contacts from user mailboxes to Microsoft 365 or Office 365.

Migrate all mailboxes at once (cutover migration) or Express migration

( Important Note: With cutover migration, you can move up to 2000 mailboxes, but due to length of time it takes to create and migrate 2000 users, it is more reasonable to migrate 150 users or less).

Use this type of migration if you’re running Exchange 2003 or Exchange 2007, and there are more than 2,000 mailboxes. For an overview of staged migration.

You have Exchange 2010 and want to migrate mailboxes in small batches over time.

Use the Import Service to migrate PST files

If your organization has many large PST files, you can use the Import Service to migrate email data to Microsoft 365 or Office 365.

You can use the Import Service to either upload the PST files through a network, or to mail the PST files in a drive that you prepare.

You can use the Internet Message Access Protocol (IMAP) to migrate user email from Gmail, Exchange, Outlook.com, and other email systems that support IMAP migration. When you migrate the user’s email by using IMAP migration, only the items in the users’ inbox or other mail folders are migrated. Contacts, calendar items, and tasks can’t be migrated with IMAP, but they can be by a user.

IMAP migration also doesn’t create mailboxes in Microsoft 365 or Office 365. You’ll have to create a mailbox for each user before you migrate their email.

How does IMAP migration work?

The main steps you perform for an IMAP email migration are shown in the following illustration. 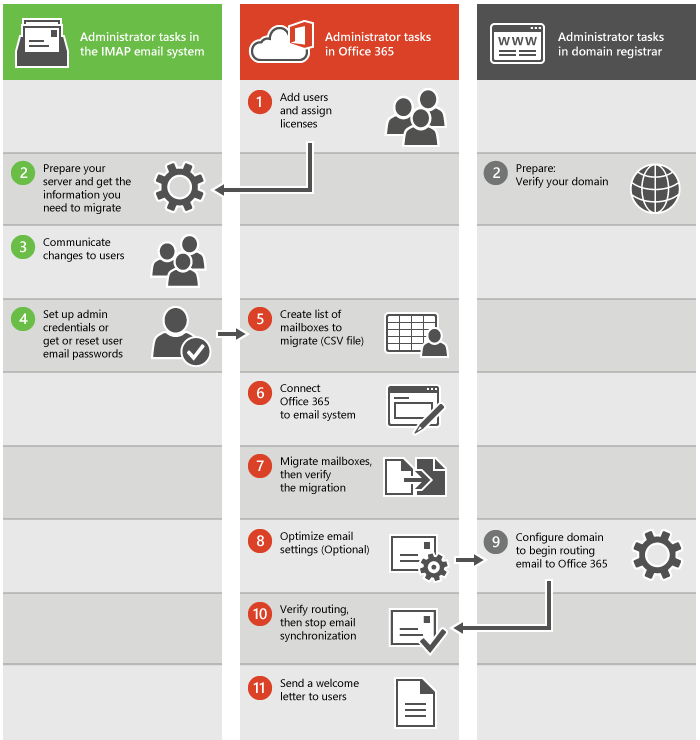 Have users import their own email

Users can import their own email, contacts, and other mailbox information to Microsoft 365 or Office 365

The largest single email message that can be migrated is based on the transport configuration for your configuration. The default limit is 35 MB but it can be up to 150 MB.

Throughput limitations for contacts and calendars completely depend on the quota restrictions for your tenant’s service account on the Google G Suite side.

Additional migration limitations are described in the following table:

Setting up an email cutover migration to Microsoft 365 or Office 365 requires careful planning. Before you begin, here are a few things to consider:

After your on-premises and Microsoft 365 or Office 365 organizations are set up for a cutover migration, post-setup tasks could impact your users.

How does cutover migration work?

The main steps you perform for a cutover migration are shown in the following illustration.

Ready to start? Work with a us to migrate email

If none of the types of migrations described will work for your organization, contact the migration team for more information

Why pay extra, when you can pay less?